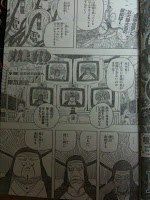 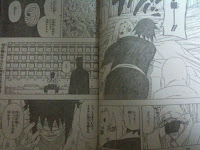 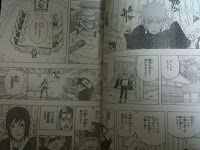 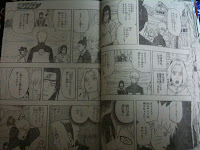 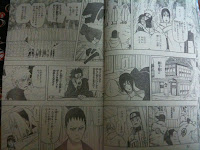 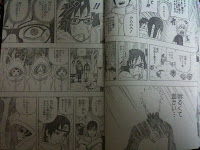 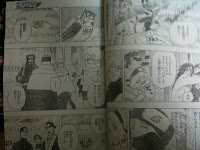 Daimyou : But this shinobi alliance ? If we let Ninjas haves too much power, we're in for a lot of troubles.

Earth Country Daimyou : Water Daimyou ! You can't even trust your own shinobi ? but first ...

Monitor Guy : huh, please can you come to an agreement ? Our power battery is going to shut off.

Wind Daimyou : We agree too.

Fire Daimyou : Mmh, I guess we can give it a try, Fire agree.

Water Daimyou : Ok, I got it. Water agree.

Monitor Guy : Good. And with this, the meeting for the Shinobi alliance ends.

Naruto : You have a whole lot of trouble and those guys are sleeping ?

Thoses guys agreed to help you. When they wake up, I want you to apologize properly, you hear me ?

Karin : "And If Naruto is like this, Sakura that's your name right ? Isn't that because of the poison you made ?

Kakashi ( Yeah, they're having a beauty sleep, But I think Naruto is misunderstaning something here )

Back to the summit

Temari : Do we got the plan from Himaru ? ( Not really sure here )

Kankuro : And the message from the Daimyou ?

Water Jounin : Did you had a good trip, Lord Kazekage ?

We received a message from the Daimyou.

Kurotsuchi : The Daimyous talked about Madara and the Bijuus ! The decision to team up to stop them wasn't long."

Kiba : "Stop trying to act all high and mighty will ya ?"

Naruto : "You're all talk but no action ! despite being from Konoha !"

Sai : "Now you said it ! To put it simply he's just stupid because he thinks too much."

Naruto : THAT'S NOT A PRAISE !

Lee : Ahhhhhhaaaaa ! It looks like the Old Naruto-kun is back !

Kakashi, Sai and Naruto are surprised.

Kakashi : "Some guys of the Anbu Roots."

Sai : "Senpai ! As you probably figured out. Our Cursed Seal from Danzou-sama disappeared. This means ..."

Sai : "Yes. So I have things to discuss with you senpais. Here is our now Hokage, Hatake Kakashi and ..."

Tenten : What ? Kill Sasuke alone ? We would never had aknowledged such a thing."

Shikamaru : "Tenten is right, Naruto. You were selfish here. Sasuke is the whole village's problem."

Kiba : "You know, we were prepared to kill Sasuke together. We had the resolve."

Neji : "The Kage Summit ! Sasuke was weakened after his fight with Danzou, Why didn't you finished him in one shot ?"

Sakura : "Madara was here ! You talk like it would have been easy to deal."

You're the hero who defeated freakin' Pain ! Someone like Sasuke should ..."

Naruto : "It's my responsability to fight him and no one else's"

Naruto : "When the time comes, I will tell."

Sakura : ( What are you hiding, Naruto ? ) Then she remembers what Naruto said to Sasuke.

Then we see Homura and Koharu.

Koharu : "We must right now select a new Hokage !

Homura : "About the Ninja alliance too ... we must have a new Hokage !"

Koharu : "Well then, we have no choice. We support you to become Hokage, Suna already voted for you."

Kakashi : "My resolve is unbreakable."

Daimyou : "What ? This a serious metting here."

Genin : "Yes, and I have something as much serious to tell."

Shizune in tears come into the meeting with a Medic Ninja !

Sasuke haves bandages all over his face.

valley of the end