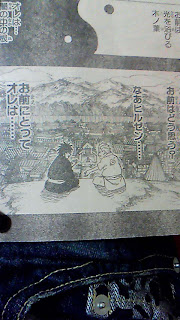 Memories are ressurected, the comrades who fought over the seat of Hokage... The time of the shinobi Danzō's demise.

Madara: (It seems you didn't have the time to use Izanagi... Danzō)

Sasuke: "Karin... When you were taken hostage, you became a burden"

Danzō walks a bit, but then falls to his knees

Danzō thinks back to a mission when he was young

Nidaime:"We're surrounded... There are... ...twenty enemies. From their abilityto track us, I'd say... Kumogakure... the skilled Kinkaku Forceą?"

Homura: "Counting the Nidaime-sama, we are with seven. ...this is terribly..."

Koharu:"the enemy still hasn't clearly located us. We could ambush them here.If we take them by surprised, we could create a way out..."

Danzō:"Impossible... In a case like this, we have no choice but to sendsomeone to create a diversion and attract their attention..."

Danzō:(I'm a shinobi... As a shinobi, I should be okay with dying on thebattlefield...! Sarutobi... what are you thinking right now? Are youprepared for this...?)

Hiruzen:"Heh! Don't worry! Even if you're looking at me like that, I can stillbrag that I'm the best among you all... I'm not going to die"

Hiruzen: "You'll all owe me one after this. Danzo, in your case"

Danzō: "Both my father and grandfather died on the battlefield as shinobi! Sacrificing oneself is a shinobi's duty...!!"

Nidaime:"Of course, i'll be going as the decoy... You guys... After this,you'll be the young Wills of Fire that will protect the village"

Danzō: "No way! You're the Hokage!! There is no shinobi above you in the village!"

Nidaime:"Danzō. you are always competing over something with Monkey, right...But in this place, it is necessary for you two to work together ascomrades. Put your personal battles aside, hm"

ą Kinkaku (金角) means "Golden Horn." It is apparently the name of a character from the famous story "Journey to the West."

Nidaime:It is a fact that you were slow to decide. First you look at yourself,it is not that you are not calm in the mind but you do not knowyourself. At this rate, you will endanger your comrades. In any case...Danzou... Saru....you don't have to be impatient. The time will come.When it arrives, give all that you have.

Nidaime:Saru... love the village and protect and bring up those who believe inyou. Hand the future over to a capable person... from tomorrow onwards,you are... the Hokage...!!

Danzou's regretful thoughts: You are always one step ahead of me...

Danzou removed the top of his robe and it can be seen that his whole body was covered with seals.

Danzou: For the shinobi world, for Konoha, I will not let you people live!

Madara: This is the reverse shishou fuuin jutsu!!

Madara: Sasuke! Get away from Danzou!!

Danzou's blood ? spilled all over

Danzou's blood ? took on spherical shapes. They combined as a sphere with Danzou in the centre.

Danzou'sthoughts: No matter where I go, I can never catch up with you...you arethe tree's leaves that are bathed in sunlight while I am the roothidden in the darkness. What do you think of me? Hey Hiruzen... What amI to you...

Picture of young Danzou and Hiruzen chatting together happily.

Sakura: What is it?

Lee: Don't you think it is better to tell Naruto kun the truth?

Sakura: ... I can't possibly tell him that... definitely not.

Kiba: Sakura... I think you're putting down on Naruto too much...

Kiba: I found Sasuke. Tobi is nearby too.

Sakura: Everyone stop for a while!

Kiba: What's wrong, why are we stopping? We have finished checking on our formations already!

Sakura prepared something under her cloak.

Sakura held a sleeping bomb in her left hand~~~

Sai: I know it... you have intention to knock us all out.

Sai took the sleep-inducing bomb from Sakura "Sakura intends to settle Sasuke on her own."

Lee: That's right, I and everyone here promised to do this!

Kiba: This fella... as I thought, smells suspicious!

Sai: Just we alone cannot win Sasuke... no less with Tobi around. We promised Kakashi sensei not to go.

Sakura's groped for something (in her pouch).

*Now the attention shifts* to another Sai. He is running for Kakashi.

Sai: I've got to hurry... the situation is getting bad.

Danzou laid on the floor covered in blood.

Situated at a small spot on top,

Madara:That's a sealing technique that seals everything to one's own corpse...It is activated upon one's death . What a dangerous technique...

valley of the end