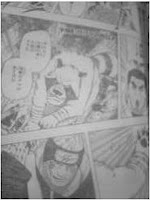 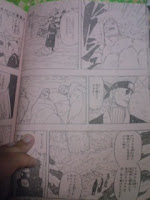 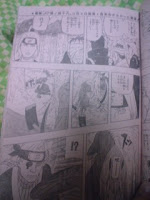 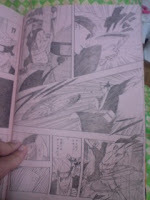 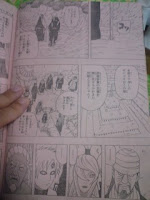 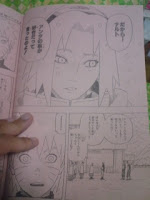 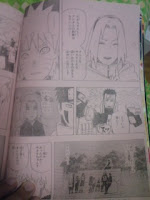 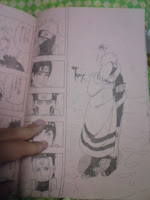 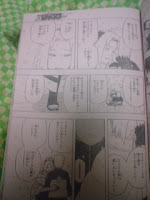 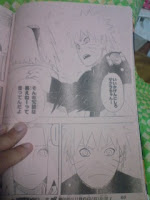 Pontai is about to swipe at him...

Ao: "It doesn't seem that this was a trap of Danzou's. It's more likely the Akatsuki's ninjutsu."

He gets rid of Zetsu's spore jutsu.

Fuu: (Says something about Zetsu's jutsu and how it preys on and transfers the vicitm's chakra to the host)

They/He is liberated from Zetsu's jutsu too.

Danzou: "So even you didn't notice it then."

Torune: "So, what about the guy who has been tailing us for a while now?"

Danzou told them to take Ao's right eye because he wants the Byakugan he has.

Just about then, Ao runs into the trap. A puppet attacks him with a sickle(?)

The sickle are thrown at him, whom catches it and throws it back at the puppet, lodging it into it.

There's a note on the puppet's forehead with the kanji for 'curse'. The kanji disappears.

Ao: "The mind-puppet switch curse seal technique... That's the name of this jutsu."

Puppet: "Damn it! Is this a mind-switch that curses whoever attacks you?!"(Unsure)

The puppet is actually Fuu.

Looks like the mind of the puppet switched places.

Torune: "What do we do after this?"

Danzou: "I'll tell you what my intentions are as soon as Fuu returns to his body."

Tsuchikage:"It's because of Danzou's recommendation that it's come to this. Andthen there's the question of whom we should leave the the high commandof the Shinobi alliance to! Is there anyone qualified for the title of'Kage'? You were the one who said that the Gokage, including myself,are worthless, Mifune"

Mifune: "I think Raikage-same should be it, though."

Tsuchikage: "But didn't you said that he was unsuited since he lets him emotions rule him?"

Mifune:"I have no doubt that now that he knows Hachibi is alive, he's going bemore composed than before. What I said earlier was me jumping toconclusions. Please forgive me. Moreover, everyone worked well togetherearlier and you made countermeasures quickly. And the key, to controlthe Bijuu Hachibi; Only Raikage-dono would be able to do that."

Tsuchikage: "Mizukage, Kazekage, is that fine with you?"

Mizukage: "I can't agree to it right now, but I have faith in Raikage-sama."

Gaara: "Let's leave it to the Raikage"

Raikage:"Oonoki of the Twin Ryou Scales, the only one who has experiencefighting Uchiha Madara is you, so your intel will be vital. Cooperatewith us."(Take this line with some salt. I'm a bit unsure about it)

Tsuchikage: "You're such a guy with a commanding tone."

Raikage:"I don't need your faith, though... But at this rate, the Shinobi worlditself will disappear. There is no other choice but to leave your ownfeelings out and cooperate!"

Tsuchikage: "Well, better than losingthis war... If the shinobi world were to disappear, then quarrelingwith you is out of the question... So I'll cooperate. The ShinobiAlliance is formed!! First we must let the feudal lords know aboutthis."

Sakura:"As I said, Naruto, I like/love you! Sasuke-kun doesn't mean anythingto me any more! I don't know why I could love anyone like him... I'mconfessing to you here, so listen to me."

Sakura:"Nothing, really... I just opened my eyes... I don't need to lovesomeone who is a missing-nin and a criminal, do I? I'm not going to bea child forever. I'm going to look reality in the eye."

Naruto: "What happened[to you], Sakura-chan? Why did you so suddenly change your opinion of me..."

Sakura: "I'm telling you, I don't need it any more! I've fallen in love with you, with all my heart, that's why."

Sakura:"I've just grown apart from Sasuke-kun... But you've always been at myside, Naruto. You cheered me on... I've realized... how you really are.You're a hero who protected the village. Everyone in the villages lovesyou now.... I've just become one of them... You were that mischievousdead-last... but little by little you've grown lovely and handsome...You were close to me so I saw it. But Sasuke-kun keeps committingcrimes... It just breaks my heart... He's just become someone distantto me."

Naruto: "Cut the bullshit, Sakura-chan... I told you I can't laugh at a joke like that."

Sakura:"What're you angry for...? I've just gotten over Sasuke-kun, that'sall. A woman's heart is a strange thing, isn't it."(<--- Unsureabout this line)