Naruto is now gets flickers of Kyubi's chakra.

Sage mode goes to the extreme level and pain gets repelled away from Naruto.

The last bunshin is released and finally Naruto gets into full sage mode.

The bodies are been carried away and Naruto is now mingled with sage+Kyubi chakra.

Danzou has been found to be the culprit and he is at the peak of the mountain controlling the PAIN's.

Sasuke comes in and find Konoha has been destroyed.

He finds pain and see's that and tells Naruto to get out of the way.

Secret - Sasuke has found that it was not konoha's order to kill all the Uchiha clan but Danzo's.

Uchiha comes into the picture with his jitter to kill out the MAIN PAIN.

Others try to find out of Danzous whereabout. Kiba with his smell gets the source and all go for Danzou.

These are collated Predictions,Theories and Spoilers of Naruto Manga Chapter 436. I will release theconfirmed scanned pics and Spoilers for Naruto Chapter 436 by Wednesday, February 18 (Japan Time). 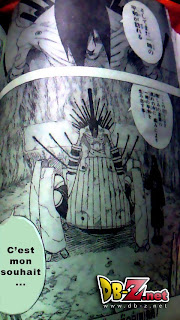 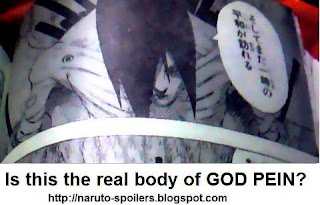 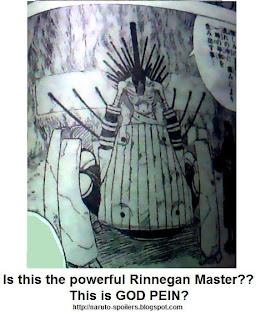 Inoichi thinks there is a high possibility that Pain is on some high mountain in Konoha.

(because it would make the chakra transfer easier)

Then it's all conservation between Naruto and Tendou.

Pain wishes for peace and justice.

Naruto wishes for peace and justice.

Both have the same target but different means to achieve it.

Following is the spoiler writer's opinion:

He looks like a skinny Orochimaru, sitting on some four-legged, wheelchair-like thing.

There are a lot of black rods piercing out from his back and his body has a lot of holes/pits.

Konan: Nagato had used up too much chakra.

Nagato, with his mouth bleeding: Peace will arrive soon.