Leon is a hit man, who is content with his life. When a young girl comes home to find her family has been killed by a drug dealer, she seeks help by going to Leon. When the girl discovers he is a hit man, she asks him to teach her the skills to take her revenge.

A no nonsense cop named Frank Bullitt, and two other cops, are assigned to what seems like a normal case: to watch a witness for 48 hours before he goes to trial on Monday. When the officers and the witness are killed, Bullitt vows to catch the killer. Set in 1969 Vietnam, during the ongoing war, Captain Willard is sent on a treacherous task into Cambodia to kill a renegade Green Beret who has set himself up as a God among a local tribe. . As Willard continues his journey he becomes more and more like the man he was sent to kill. 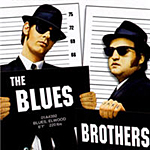 After the rise of popularity throughout several sketches on Saturday Night Live, and popular recordings, Chicago blues performer brothers Jake and Elwood (John Belushi and Dan Aykroyd), finally take their act to the big screen. In this hilarious, action packed hit from 1980, the two brothers try to save their childhood orphanage, while of course getting into plenty of trouble along the way.

Jean-Paul Belmondo and Jean Seberg play two young lovers on the run from the law after Belmondo kills a cop and steals a car. Soon they are on an adventure through the streets of Paris searching for money he is owed so that he and his American girlfriend can escape to Italy. This classic film is a mix between tragedy and Bonnie and Clyde type romance. Butch Cassidy and the Sundance Kid

Butch and Sundance are the two leaders a small gang. Butch is all ideas and Sundance is filled with skill and action. The west is becoming sophisticated and when Butch and Sundance rob too many trains, a particular group begins following them everywhere they go. The two then decide to escape to Bolivia which leads to even more adventures. Luke is sent to prison, and must deal with dangerous, intimidating gangs. The head of the gang hates him, and tries to break him by beating him up. All of this doesn't work, and he eventually gains respect. He has some fun in jail doing things for the hell of it, after his mother dies the gang captures him in fear he might want to attend the funeral. He eventually escapes, and gets caught, and escapes again but nothing will break him. New York City Detective John McClane (Bruce Willis) has just arrived in Los Angeles to spend Christmas with his wife. Unfortunately, it winds up not being a Merry Christmas for everyone. A group of terrorists, led by Hans Gruber is holding everyone in the Nakatomi Plaza building hostage. It's up to McClane to rescue everyone, and stop all the bad guys. Wyatt and Billy are two motorcycle riders on their way to Mardis Gras. On the way, they have crazy encounters with different aspects of society. This box-office hit from 1969 leads the way of the American independent cinema movement, and represents the attitude of the 60′s hippy generation. A martial arts specialist is recruited to sneak into a drug operation under the disguise of taking part in an invitational contest sponsored by a one handed crime boss. This film is filled with action and suspense, and it is Bruce Lee's final film before his unfortunate death. Before he became a filmmaker, Cameron Crowe was a reporter for Rolling Stone who went undercover for a year at a California high school and wrote a book about it. He wrote the script for this film, based on that book. The story line is deals with the lives of different teens at Ridgemont High School, who get themselves into all sorts of situations with sex, drugs, and rock and roll. This will go down as one of the best teen movies ever created. A lonely, remote thirty-something young professional seeks an escape from his ordinary life with the help of an underground fight club. In this club, boxing matches and harmless pranks soon lead to an out-of-control spiral towards oblivion. Based on the novel by Chuck Palahniuk, Fight Club takes the audience into a world that finds discomfort with consumerism and changes in the state of masculinity in American culture, and throws violence around as if it is the problem solver. A mobster moves to Hollywood to gather a debt and has a life changing moment. That moment is finding out that his Mafioso skills lend themselves quite nicely to what he's always really wanted to do which is producing movies. The Good, The Bad, The Ugly

Clint Eastwood stars as Blondie (the Good), a man who searches for a collection of stolen gold against rivals the Bad played by Lee Van Cleef, who is a coldblooded bounty hunter named Angel eyes, and the Ugly played by Eli Wallach, who is a Mexican bandit named Tuco. This tale involves bloodshed, shoot-outs, double-crossing, and the ongoing search for treasure. Professional assassin, Martin Blank is sent on a mission. He travels to small Detroit suburb, Grosse Pointe, and, by coincidence, his ten-year high school reunion party is taking place there at the same time In this film, the lives of two men are focused on. They are on opposite sides of the law - one a detective; the other a thief. The thief considers getting out of the business after one last score, while the detective tries to put him behind bars. Four London working class stiffs gather their money to put one in a high stakes card game, but things go horribly wrong as they end up owing half a million pounds. Not only do they owe extreme cash, they only have one week to come up with it. This film is filled with style, class, dark humor, plot twists and turns. hundred! A bandit terrorizes a small Mexican farming village each

year. Several of the village elders send three of the farmers into the

United States to search for gunmen to defend them. They end up with 7,

each of whom comes for a different reason. They must prepare the town to

repulse an army of over 100 bandits who will arrive wanting food. Danny Ocean, (George Clooney), gets together a gang of ten men including Rusty Ryan (Brad Pitt) and Linus Caldwell (Matt Damon) along with others to pull off the biggest heist ever known. Their targets are set as The Mirage, the

Bellagio and the MGM Grand casinos in Las Vegas. It's not going to be easy, but the plan is made with hopes of secretly getting in and out, leaving $150 million richer. Once Upon a Time in America

A gang of Jewish gangsters live in the rough neighborhood of New York's Lower East Side in the 1920s, from childhood, through their glory years during prohibition, and meet again after being in hiding thirty five years later. Vincent Vega and Jules Winnfield are two dangerous hit men on the chase for a briefcase with stole goods that belong to their feared boss. Along the way, they run into a few unexpected and somewhat problematic detours. A gang of thieves carry out an armed robbery on a Diamond warehouse. At first they are confident in their plan until they find out the police are after them. This leads them to believe that they suspect they have a rat in their company. traveling alone through Australia after a nuclear war. His family is killed, and he soon finds himself the only hope of a small group of honest people running an isolated oil refinery and must protect them from the bike gang that is terrorizing them. He must cross the no man's land several times to allow them to make a dash for freedom, pursued by the bandits in their vehicles Set against the backdrop of New York's seedy underground, uncertain poker world, Rounders is the tale of Mike McDermott (Matt Damon), a young man who is a reformed gambler who must return to playing big stakes poker to help a friend pay off loan sharks. Mcdermott wants to start his new life clean, but he winds up gambling on more than just money, and gambles the rest of his life. In this 1977 hit, John Travolta plays Tony, a young guy from Brooklyn who feels his only chance to get somewhere is to be the king of the disco floor. When Tony falls in love with a woman he meets at a dance club, who strives for greater things in life, he realizes he has to put his own life into perspective. Jeffrey "The Dude” Lebowski is the ultimate LA slacker, until one day his house is robbed and his rug is urinated on by two irritated gangsters who have mistaken him for Jeffrey Lebowski, the LA millionaire, whose wife owes a huge amount of cash. The Dude then becomes entwined in the plot when he goes to meet with the real Lebowski in order to get some payback for his soiled rug, and is recruited to be the connection between Lebowski and the captors of his now "kidnapped” wife. Vito Corleone is the aging boss of the Corleone Mafia Family. His youngest son Michael has returned from WWII, and wants to live a normal life even though his entire family is involved in the mafia. Drama and violence ensues and Michael must control everything while the Corleone family is torn apart. Five men are rushed into the New York police station because a crime was committed. They are the usual suspects. They all agree to do a job together for a little revenge. However, they are just puppets and someone mysterious is calling all the shots. When a captivating New York gang leader is shot at a conclave in the Bronx, a group from Coney Island, called the Warriors, gets blamed and are forced to fight all the way back to their own turf. In this poetic portrayal of gang violence, the Warriors struggle for survival, to prove their innocence and redeem themselves. Clarence and Alabama are newlyweds who get a hold of an unexpected wedding present. Little do they know, ruthless gangsters are on the happy couple's tail, absolutely determined to get back their goods.